Pride in Our Canadian Troops

I support our Canadian Military. I support the role Canada has taken in Afghanistan. In the context of our comfortable and privileged lives, it is far too easy to take for granted the contribution our Canadian Military makes to creating better world and protecting / restoring basic human rights and freedoms, one child, one woman, one man at a time. So, here are a few thoughts I have about Canada's brave defenders of freedom and choice.

At the end of March, I went to Colonel Jamie Cade's presentation on the Canadian Contribution to Khandahar, Afghanistan, which was sponsored by the Center for Military and Strategic Studies, University of Calgary. The Gauntlet has a good article, "Optimism in Afghanistan", which summarizes a few key points that Jamie Cade addressed. Col. Cade described the multifacetted role the Canadian Military plays in Khandahar, from reconstruction, health care, government support, military and police training, to battle groups. His stories from "in theatre" helped me to better understand how Canadian men and women are making inroads in helping Afghans to restore their government, rebuild and staff schools, access healthcare, pave roads and to secure gainful and lawful employment. A comment that stuck with me was, "We [the Canadian Troops] are where the people are because this is about the people". It was a privilege to shake Col. Cade's hand. I am sincerely proud of the Canadian Military and the heroic role Canadian troops are playing in Afghanistan. There was another talk presented by Col. Cade in April - I wish I had known in time to attend.

Read this blog post today about a War Artist in Afghanistan, which excerpts an article "Lasting Impressions", on CBC. A key quote by Sharon Mackay: 'I'm shocked at how good our army really is. I think I was under the impression that we are peacekeepers, we're gentler people. We're as tough as they come.' Again, it stirred deeply held feelings of pride in our Canadian Military.

Finally, On Sheep Dogs and Wolves, and those soft and gooey sheep... Found this comment and interpretation posted by Fred in response to Kate Macmillan's "She stops in a diamond".

By LTC (RET) Dave Grossman, author of "On Killing."

"Most of the people in our society are sheep. They are kind, gentle, productive creatures who can only hurt one another by accident. Most citizens are kind, decent people who are not capable of hurting each other, except by accident or under extreme provocation. They are sheep. I mean nothing negative by calling them sheep. To me it is like the pretty, blue robin's egg. Inside it is soft and gooey but someday it will grow into something wonderful. But the egg cannot survive without its hard blue shell. Police officers, soldiers, and other warriors are like that shell, and someday the civilization they protect will grow into something wonderful. For now, though, they need warriors to protect them from the predators.

Let me expand on this old soldier's excellent model of the sheep, wolves, and sheepdogs. We know that the sheep live in denial, that is what makes them sheep. They do not want to believe that there is evil in the world. They can accept the fact that fires can happen, which is why they want fire extinguishers, fire sprinklers, fire alarms and fire exits throughout their kids' schools.

The sheep generally do not like the sheepdog. He looks a lot like the wolf. He has fangs and the capacity for violence. The difference, though, is that the sheepdog must not, can not and will not ever harm the sheep. Any sheep dog who intentionally harms the lowliest little lamb will be punished and removed. The world cannot work any other way, at least not in a representative democracy or a republic such as ours.

Still, the sheepdog disturbs the sheep. He is a constant reminder that there are wolves in the land. They would prefer that he didn't tell them where to go, or give them traffic tickets, or stand at the ready in our airports in camouflage fatigues holding an M-16. The sheep would much rather have the sheepdog cash in his fangs, spray paint himself white, and go, "Baa."

Until the wolf shows up. Then the entire flock tries desperately to hide behind one lonely sheepdog.

The moral for Canadians? Instead of the sheep criticizing the sheepdog, let's support their efforts to eradicate the wolves.

Darwin, Royal Tyrell and Some Wacky Places on Earth

A good friend of mine just returned from the Galapagos - she was following the scientific trail blazed by Darwin two centuries ago. February 12, 2009 marks the birthday anniversary of evolutionary biologist Charles Darwin, and the 200th anniversary of Darwin's birth, and the 150th anniversary of the publication of Darwin's On the Origin of the Species. Darwin's scientific work documented and brought new ideas and theories about natural selection, the evolution of man, the role of inheritance, and genetics and DNA; Darwin's work continues to have relevance to today's scientists who continue to build and extended upon his theories. Scientific inquiry is a dynamic discipline that seeks to create and to replace human knowledge -- it is a peer reviewed community that vetts and tests new ideas based on replicability, rigor and reasoned and disciplined inquiry.

In academia, and especially in the physical sciences, there is an emphasis on empirical evidence - artifacts, disciplined observations and materials - that can be systematically analyzed for information about earth, human, animal and plant history. In addition to partially funding university researchers who push frontiers in science, the provincial and federal governments invest buckets of tax dollars - public money - in several large research centers that are based on the value of scientific inquiry.

I wholeheartedly support public investment in research, scientific inquiry and better understanding our world, our humanity, our flora and fauna. For example, the Royal Tyrell Museum - http://www.tyrrellmuseum.com/ is Canada’s only research institution devoted entirely to palaeontology, and it celebrates the long history and spectacular diversity of life - from the tiniest grains of pollen to the mightiest dinosaurs. Set in the Alberta badlands, the Museum opened in September, 1985. Nearly 600,000 visitors came the first year, and hundreds of thousands continue to visit each year. The Government of Alberta, under the Ministry of Culture and Community Spirit, operates the Museum. The Royal Tyrrell's mandate is to collect, conserve, research and interpret palaeontological history with special reference to Alberta’s fossil heritage.

In contrast to the role science plays in understanding our world and the sentient beings that inhabit it, here are a few of my picks for "wacky places on earth" that promote a heartfelt, but largely faith-based interpretation of the earth's history and physical record, and the genesis of man, beast and vegetation.

There are more of these "creationist science" museums, and I haven't yet investigated all of them to better understand who builds them and how they are funded. What the creationist museums appear to have in common is the emphasis on biblical-subjective, rather than scientific-objective, interpretations of physical evidence.

I am all for free speech, freedom of expression and lively academic debate - after all, I am an educational researcher and bibliophile who is against burning books, censoring publications or limiting debate, among other things. So, while I find these faith-based, creationist museums that argue, based on the bible and feelings, rather than the scientific record and physical evidence, that humans and dinosaurs co-existed, a bit wacky, I support their right to exist. Specifically, I fervently support the individual and collective right to use personal money to build "creationist science" displays and to promote these faith-based feelings and ideas, I do not support the use of public money, my tax dollars, to support this type of endeavor.
Posted by GirlProf at 9:23 AM No comments:

Canadian Human Right to Free Speech, Freedom of Expression and Freedom of Religion

Here is a Monday morning serving of a few efforts to uphold our Canadian Human Rights.

Ezra Levant's editorial in the Ottawa Metro, a commuter newspaper, "The Price of Freedom is Eternal Vigilance", is well worth a read. We don't support burning books in Canada, do we? Do we? "Is banning words — even offensive words — a Canadian tradition?" asks Ezra. In his research, Levant has found that Human Rights Commissions have a 100% conviction rate for “hate speech” cases. The human rights "industry" should trouble us all. Buy the book, Shakedown: How Our Government is Undermining Democracy in the Name of Human Rights, and read first hand about the abuses by the provincial and federal Human Rights Commissions - it is your democratic RIGHT, after all. For free, you can read all about it on Ezra's Blog.

My husband and I took our children to the Calgary March on Saturday, May 2nd - as I explained to them, "As Canadian citizens, you have the right to speak out for ideas and opinions you believe in and to publicly protest against bills and laws with which you disagree. You have the right to organize, assemble and participate in peaceful public protests against the Government. As Canadian citizens, you have the right to publicly disagree with the status quo, to hold and to share opinions that are your very own and to maintain and discuss beliefs that are different than and may even be offensive to the majority. Freedom of speech and freedom of expression are your rights as Canadians". And, I told both of my children to smile as the nice police officer took pictures of the peaceful crowd and of the people on the stage making speeches.

Quote of the day: Ferreras, in Pique magazine writes, "Did you know it's a human right to work at McDonald's and not wash your hands? Or to be a rape counsellor even though you're a male-to-female transexual and victims are uncomfortable talking to you? Or that it's a hate crime to offend the religious sensibilities of Islamist zealots? All these and more are human rights, according to Canadian human rights commissions." Really. Well, these are NOT the types of rights and responsibilities that I talk to my children about, nor are they the rights that my grandfather and my great-uncle fought and died for in WW2. Eternal Vigilance, people.

A great quote from Par Sami El Soudi, who wrote a lengthy review of Levant's book, Shakedown, for Metula News (published in both French and English): "We all often forget that words are not the real thing. You can be called “progressive” and passionately strive to hold back civilization, or call a “people's democracy” the rule of a small elite that hates and suppresses the people. You can also call “Human Rights Commission” the main threat against human rights to have appeared in an advanced democracy." (emphasis mine).

Finally, this is a great political cartoon by Malcolm Mayes on the Human Rights Commissions: 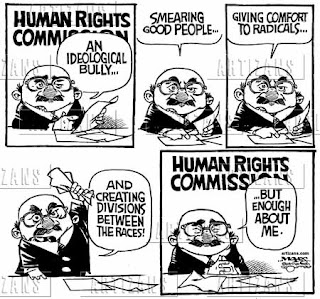 Posted by GirlProf at 7:39 AM No comments: 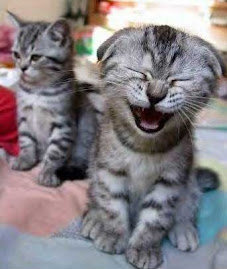 All you can do is laugh

GirlProf
This blog is part of a public exploration of what one female professor actually "does" and "thinks". In particular, I write about one female professor's experiences in the academy. Doctoral and masters students are usually interested in what the academic life can and might entail. In response to many questions about my work, I have shared a number of stories (almost all of them true!). Given the response, usually "no, really??" or, "no way!", I realized that when added up, these stories might be of interest to a wider audience. So, here is the girlprof blog - girl is a tribute to Pat Clifford who encouraged me to keep a pony tail - some days, I am sorry I didn't. Blogs sprout out of graduate courses, too.